Home / Is there anybody out there? 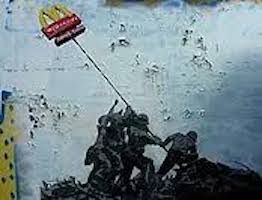 Posted Apr 20 2018 by Moderator in General with 0 Comments

Groowinky features poetic musings, zany drawings (done mostly on discarded journal entries), invented words, films, and other creations which pour out of one man who lives feverishly upon the creative currents of his own mind.

Once upon a time not very long ago, in a place not very far from where you are standing right now, the world was a vast place full of wonder, mystery, adventure, and promise. Thousands of generations of men, women, and children, stretching back into the deepest recesses of historical memory, and even further back than that, made this world—brick-by-brick, day-by-day, season-by-season, and year-by-year. Over the millennia, this world suffered feasts, famines, huge leaps forward, devastating setbacks, wars to end all wars, and revolutions to overthrow all revolutions. One thing remained constant despite all these changes—the world was unendingly and always the domain of humanity.

It doesn’t take long for an unprecedented event to take its place in the long historical march of previously unprecedented events, and the next unprecedented event seems always to threaten us with its incurable unprecedentedness. But this time, we’re really up against it—never in all the previous disruptions of our sacred traditions and principles have we been confronted with the unpoetic and dehumanizing reality of digital technology, social media, high-definition everything, perennial surveillance, and inescapable, global totalitarian behavior modification!

Once upon a time, the tule fog in the Sacramento Valley was so dense every winter that you couldn’t see across the street in the morning. Once upon a time, the magic of San Francisco’s construction moratorium attracted travelers from all over the world to indulge in The City's charms. Once upon a time, the threat of instant hypothermia kept the North Pole’s prehistoric inhabitants safe from the predatory advances of real estate developers and tourists. Dude, where’s my world?