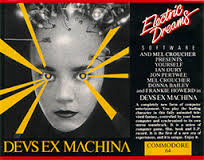 Deus ex machina is a Latin phrase meaning "God from the machine," and has until recently been used almost exclusively to discuss literature. When a complicated plot in a novel or short story runs up against a seemingly unsolvable problem, the deus ex machina plot device is sometimes employed. The film Training Day used this device in the scene where the new police recruit, stranded in the 'hood and about to be eliminated by some homies, is saved by the unlikely discovery of one of the thugs' niece's wallet in his jacket. Initially, this discovery inflames the gang member, but ultimately allows the narc to tell his side of the story, which, once confirmed by a quick cell phone call between ex-felon and young niece, allows the handsome young police-officer in-training to go about his day.

Unfortunately, the hordes of devoutly literal-minded fanatical idiots have destroyed another thread in the fabric of human civilization. While illiteracy, corruption, hunger, incompetence, fear, violence, and failure spread like wildfire around the globe, and the world governments ransack the public funds to arm themselves to the teeth and make fools of themselves on the Internet and the public airwaves, the public has to suffer the IT industry's decision to use its money, talent, and influence to reverse the deus ex machina effect. Instead of rushing in to save the day by funding schools, hospitals, and the effort to eliminate lobbyists from government and put an end to the for-profit prison business, they have released Deus Ex Machina the video game. Now you can pretend the world's problems are unimportant and immerse yourself in a fully functioning psychotic pseudo-reality so you will never have to wake up and feel the humiliating slap in the face the Big Money decided to deal you this week....Have fun! (Not literally!)